Aren’t we lucky ? Being IES Sefarad our high school we are part of a remarkable neighborhood. Look around you! You may come to school every day and yet miss what’s just there! Let´s do something about it and meet our neighbors!

Last Friday a few 2Bach students made our way to the Jewish quarter and paid a visit to Santa Maria la Blanca and El Tránsito, two magnificent synagogues.

We spent our English lesson learning a few things on our full of history locals. Let´s know a little bit about them:

The Jewish Quarter of Toledo is the neighborhood where the Jewish lived in the Middle Ages.

In Toledo, between the 12th and the 13th centuries, three cultures lived together: Jews, Christians and Muslims and that’s why Toledo is called “The City of the Three Cultures”.

There were as many as eleven synagogues in Toledo.

“La Puerta del Cambrón”, where our high school is located, was the main entrance to the Jewish Quarter and was traditionally called “The Jew Gate”.

“Sefarad” is the Hebrew name for the Iberian Peninsula and the “Sefardíes” are the Jews from Spain and Portugal.

Santa María la Blanca is considered a symbol of the cooperation that existed among the three cultures. Although it is a synagogue, it was built by Moorish architects on Christian soil.

It is designed in “Mudejar” style, and that´s why it has inscriptions in Arabic on its walls. Built in the 12th century Santa María la Blanca is considered the most ancient synagogue in Europe still standing. During the Independence War, it was used as a warehouse.

El Tránsito Synagogue
It was built by Samuel Ben Al-Levi (c.1320-1360). He was advisor and treasurer to King Pedro I of Castile (known as Pedro the Cruel).

It is also built in «Mudéjar» style. The design of the synagogue recalls the Nasrid style of architecture that was employed during the same period in the decorations of the Alhambra palace in Granada as well as the Mosque in Cordoba, both built at the same time.

The most impressive elements of the interior decoration are the Hebrew and Arabic inscriptions that decorate the walls, the arches around the windows and some column capitals. The polychrome stucco work is superb.

The coffered ceiling (artesonado) is made of cedar wood. Tradition has it that the wood was brought by Samuel Ha-Levi from Lebanon in imitation of King Salomon. It became a private church for a military order after the expulsion of the Jews from Spain.

The Sefardí museum is also located in this synagogue. It has been considered National Heritage since 1964.

If you want to learn more you can find extra info in:

And to watch the video we´ve made click on:

Interesting, isn’t it? Then, don´t miss our next bit on our impressive surroundings.

Contributions are most welcome! 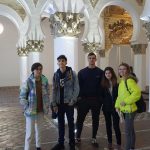 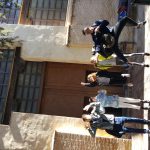 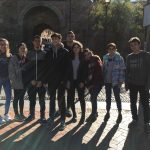 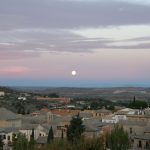 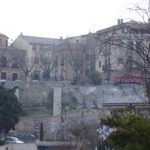 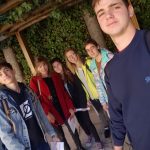 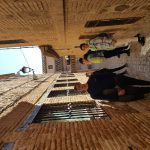